Rolex knows a thing or two about icons. It has been said that had the brand made nothing else but the Rolex Submariner, there is a good chance that it would still be just as highly regarded among its peers as it is today.

Why? Because the Rolex Submariner is more than just a blueprint of the ideal dive watch. It is a trailblazer in the field of perfection. Its aesthetics have been changed over the years, tweaked here and there, refined in line with tastes and trends, but only ever so slightly. The watch at its core never deviated. Simply because it never had to. Rolex got it right the first time and was smart enough to know a winning combination when it saw it.

The material design of a watch is one thing, but its color is another. While Rolex played it safe with the format of the Submariner, it was more than happy to experiment with its color on occasion. Perhaps the most successful (non-black) dial that Rolex has ever produced is its sunburst blue dial. Blue Submariner watches have existed in Rolex’s catalog since the end of the 1960s and have consistently been favorites among collectors due to the fresh aesthetic that they bring to the brand’s iconic dive watch. Since 2019, the prices for pre-owned blue Rolex Submariner watches have soared – and the longer you spend looking at them, the easier it becomes to see why.

Click here for our Ultimate Buying Guide on the Rolex Submariner. 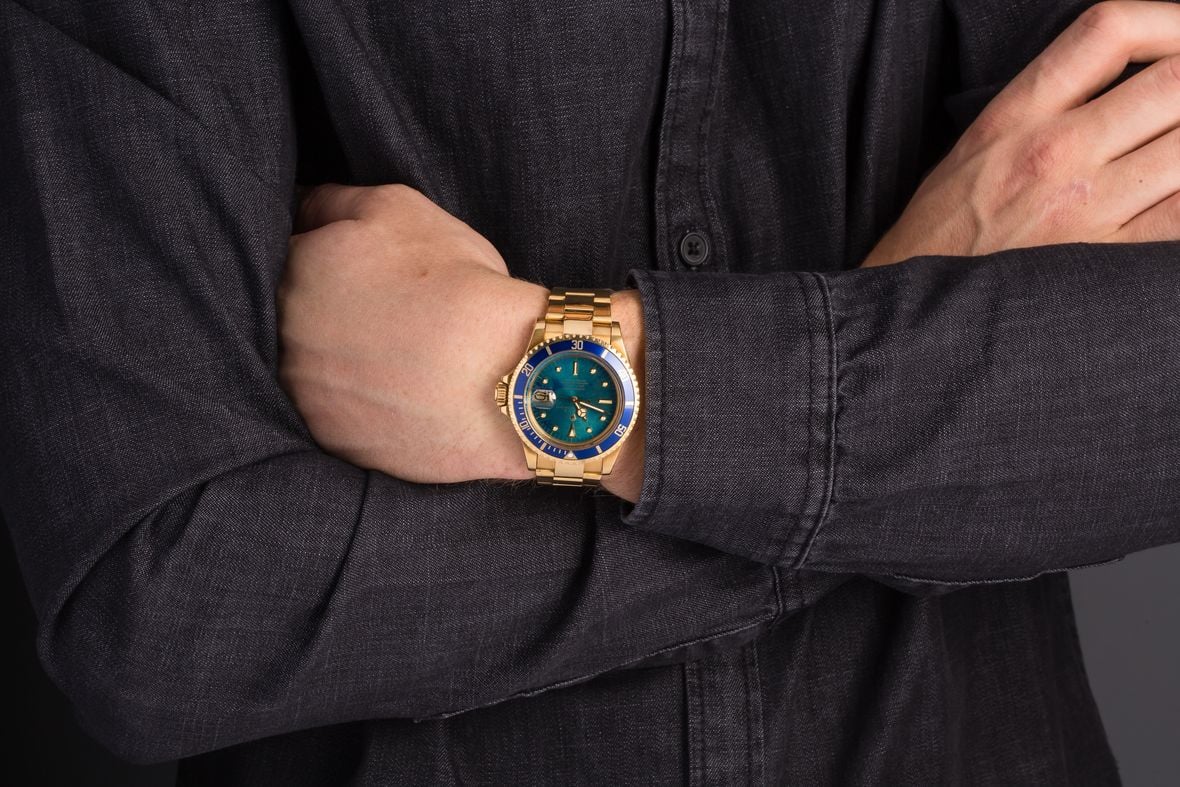 A Classic In The Making

Since its release in 1954, the Submariner has been an emblem of the brand and of horology in general. It is a genuine icon of design, emulated by practically every other watch manufacturer at one point or another. Beyond our industry, it is discussed in design circles as a masterpiece and regarded in fashion quarters as the holy grail: a permanent fixture on the wrists of the rich and famous. It also holds the distinction as the most counterfeited watch in the world. There are now more fakes in existence than the real thing.

During its six-plus decades at the top, the Rolex Submariner has undergone a myriad of changes and upgrades and has been made available in a host of different metals and color schemes. While still one of the most accomplished dive watches around, its true rarity value  (and the reason for its meteoric rise in status) has been its versatility. A Submariner can be worn with anything, and it is such a recognizable symbol of good taste, it opens doors and can get you in almost anywhere.

The end of the 1960s saw the Submariner’s first foray into the color blue. In its second decade as the world’s premier dive watch, it was a striking 18k yellow gold reference that aimed to catch the eye of a new and affluent audience looking for that latest status boost. A solid yellow gold case was paired with a contrasting blue dial and bezel. Spurred on by the success of this earliest divergence from the traditional monotone color profile, Rolex has gone on to release several variations in different combinations. 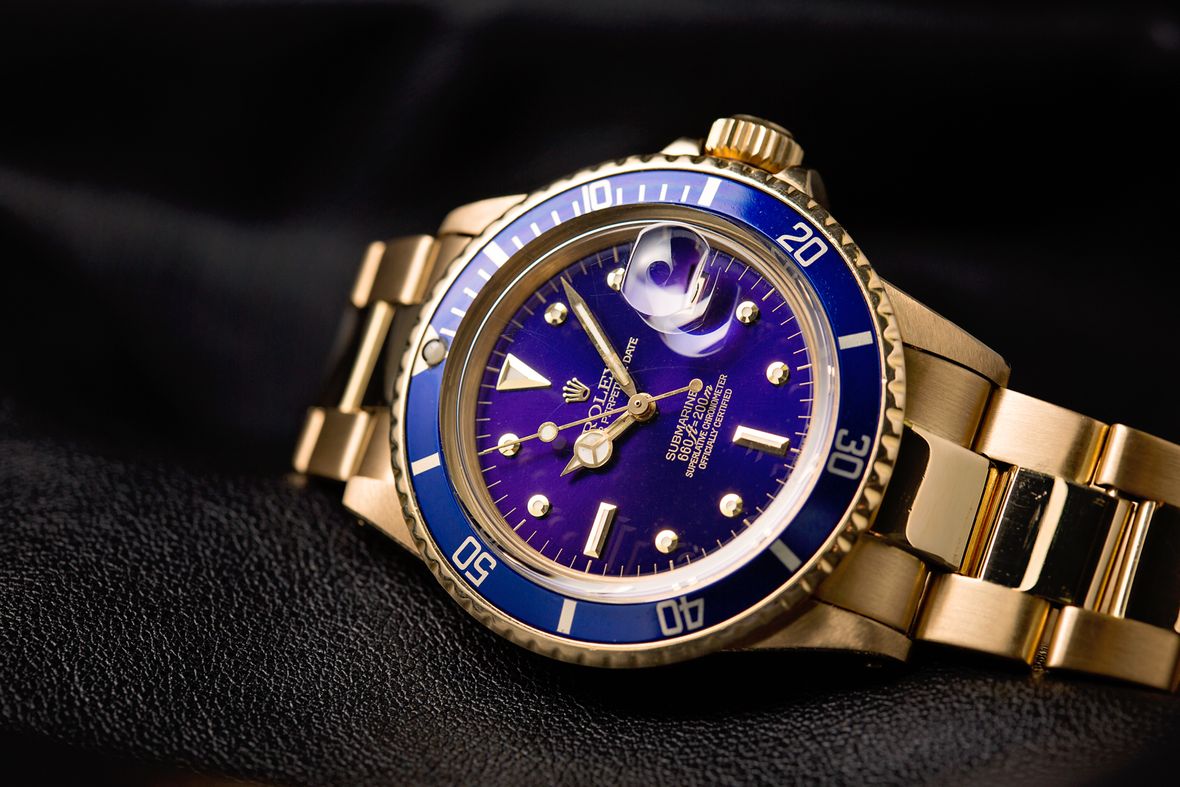 That first blue reference, the Submariner ref. 1680/8 was an intelligent combination of showy and workmanlike, a best of both worlds mix that caught the imagination as much as the eye. Despite being rendered in exquisite 18k yellow gold with all of its luxurious connotations, the reference 1680/8 still offered users the exact same professional dive watch capabilities and 200-meter depth rating as the rugged stainless steel version.

The metallic tones of the ref. 1680/8 were complemented by a blue sunburst dial that seemed to change color in different lighting conditions with rays radiating out from the center. Surrounding that sunburst dial, the blue anodized aluminum bezel insert gave the exterior a similar sparkle, turning Rolex’s rugged date-displaying dive watch into what can only be accurately described as a true statement piece.

There is something almost magical about a solid gold Rolex sports watch. Sports models generally feature larger cases, additional functions, and bolder designs. When rendered in stainless steel, these traits give Rolex sports watches a rugged and utilitarian appearance. However, when crafted from solid gold, they take on an unapologetically luxurious and in-your-face aesthetic. And when you combine a solid gold Submariner with a striking blue dial and bezel, you get a watch that is often considered to be the poster child of the modern luxury sports watch. 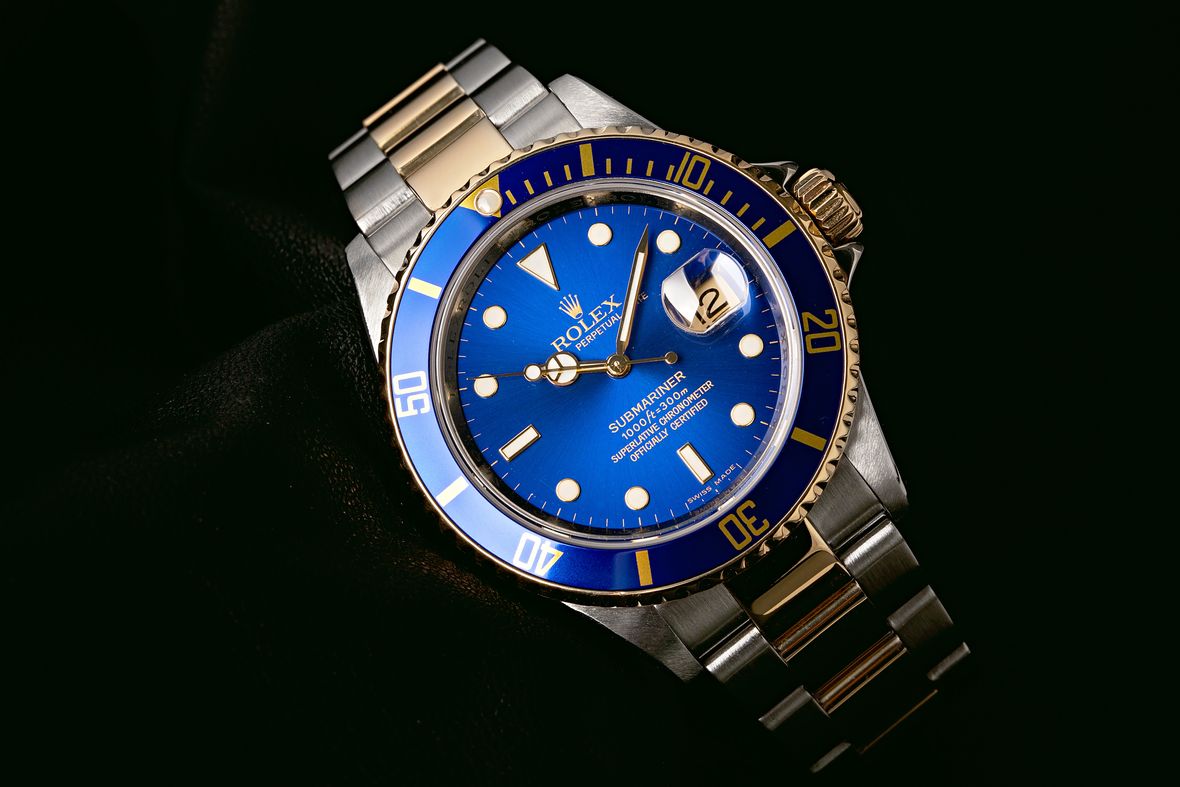 The blue Rolex Submariner was a popular favorite during the 1970s, but with blue dials and bezels exclusively offered on the solid 18k gold version, the price of a blue Submariner was outside the realm of possibility for a decent percentage of buyers. However, in 1984, Rolex released the first two-tone Submariner (ref. 16803), offering it with the option of either a black or blue dial and bezel, which expanded the availability of blue Submariner watches to a significantly wider range of potential buyers.

While Rolesor (Rolex’s signature term for the use of stainless steel and gold components on a single watch) may not seem to be the kind of material combination one would immediately think of for a diving tool, gold’s extreme resistance to saltwater corrosion (even superior to that of steel) actually makes this fusion surprisingly apt. The yellow gold parts provide the watch with a lot of the same luxurious flash as a solid gold model, without nearly the same weight or cost that is typically associated with a gold luxury timepiece.

The first generation of two-tone blue Submariner watches also brought with it a number of other updates to the collection, such as scratch-resistant sapphire crystals, unidirectional rotating bezels, and an increased depth rating of 300 meters. These same enhancements were also featured on the solid gold version of the blue Submariner (ref. 16808), signaling a major step forward for Rolex’s iconic dive watch. However, by the late 1980s, a new movement resulted in the Submariner receiving yet another update, and Rolex launched a new generation in 1988 that largely retained the same core design of its predecessors, but now featured the updated Caliber 3135 movement.

Just like before, blue dials and bezels were exclusively offered on the two-tone and solid gold versions of the Submariner Date, and although the new ref. 16613 and ref. 16618 appeared virtually identical to the two-tone and 18k gold models (respectively) from the previous generation, the new editions with the updated Cal. 3135 movement would remain in production for more than two decades until Rolex finally gave the Submariner a major overhaul in 2008. 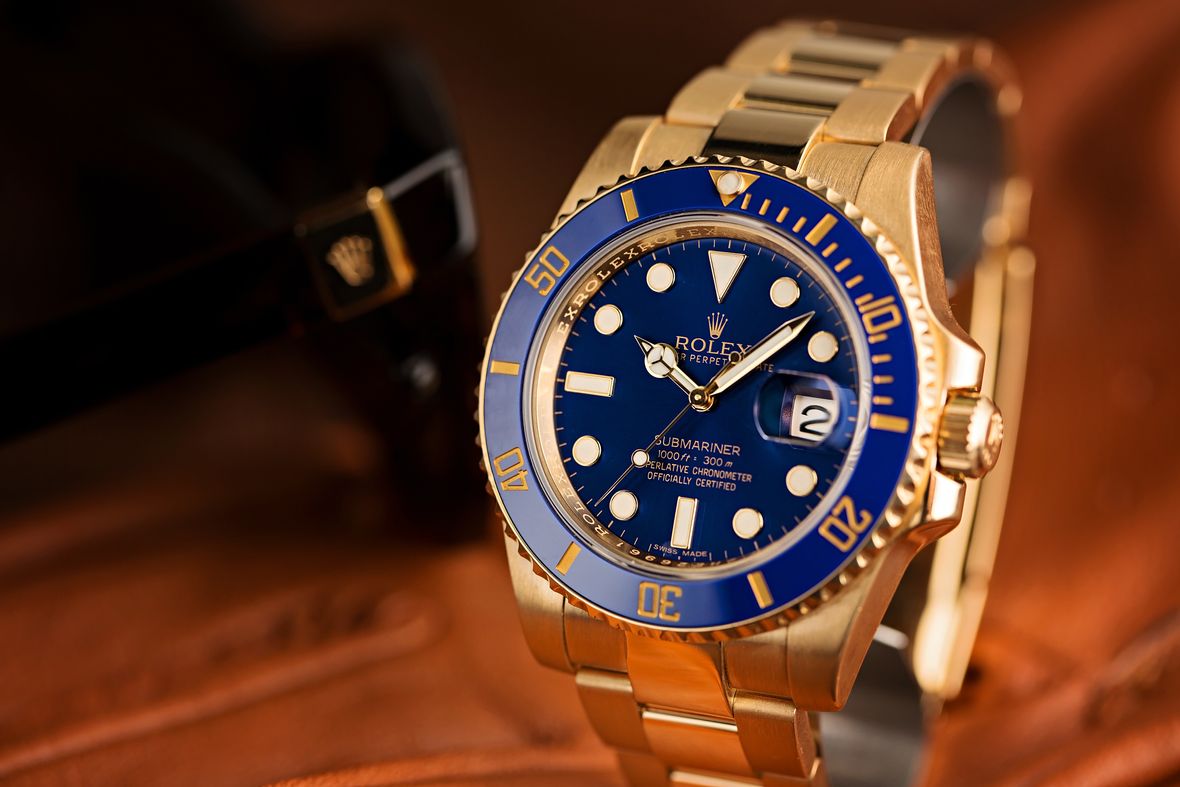 Although the reference 1661x series of Rolex Submariner watches represented only a minor aesthetic update compared to the previous generation, these models would go on to define Rolex’s legendary dive watch for more than twenty years. However, starting in 2008, Rolex began to roll out a new generation of Submariner watches, including an all-new blue model crafted from solid 18k white gold.

While the new generation was powered by the same Caliber 3135 movement, virtually everything else about the watch had been changed. The Submariner’s 40mm case now featured thicker lugs and larger crown guards for a much larger and more angular overall appearance. Additionally, while the bezel inserts on the previous generation were made out of anodized aluminum, the bezel inserts on the new generation were constructed from a single piece of Cerachrom, Rolex’s proprietary ceramic material that is virtually impervious to scratches and the fading effects of UV light.

Like before, the new solid 18k yellow gold Submariner was offered with either a black (ref. 116618LN) or blue (ref. 116618LB) dial and bezel. However, joining the lineup for 2008 was the reference 116619LB, which also featured a blue dial and blue ceramic bezel but was crafted entirely from solid 18k white gold. Quickly picking up the nickname the “Smurf” due to its white and blue color profile, the blue dial fitted to the ref. 116619 is a glossy flat blue style, which sets it apart from the sunburst blue style found in the two-tone and yellow gold versions of the blue Submariner.

One year later in 2009, Rolex released an updated version of the blue Submariner in signature two-tone steel and gold Rolesor finish. Just like with the solid gold editions, the new two-tone Submariner watches were offered with either black or blue dials and bezels, with the blue version labeled the ref. 116613LB, where LB stands for “Lunette Bleu” (meaning “blue bezel” in French). Additionally, just like the updated solid gold editions, the new two-tone blue Submariner featured a bezel insert constructed from a single piece of its proprietary blue Cerachrom material. 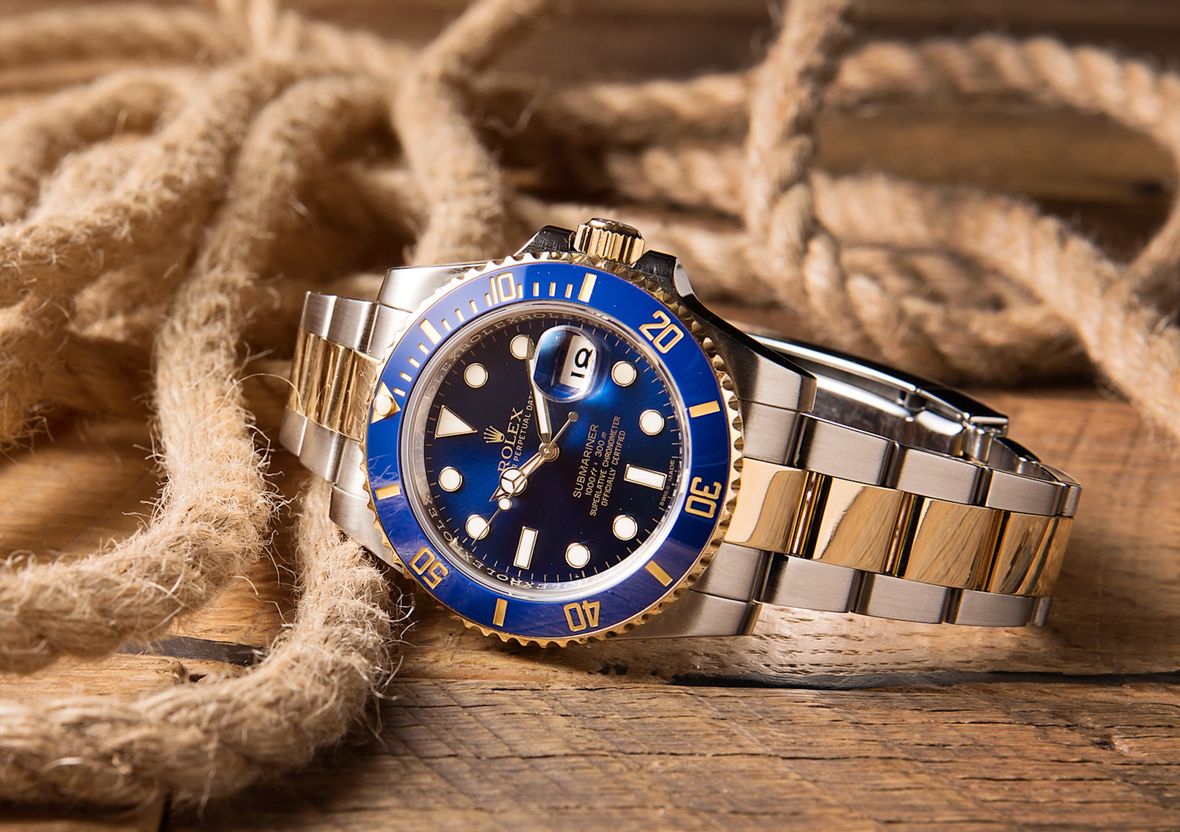 Just as before, blue dials and bezel are only offered on the solid gold and two-tone versions, with the new models known as ref. 126618LB and 126613LB (respectively). One minor difference between the previous blue Submariner dials and the updated ones found on the 41mm generation is the color of the text. On the previous 40mm series, the blue dials featured yellow gold writing, while the blue dials on the new 41mm Submariner watches feature white text. With that in mind, despite the minor updates to the blue dials of the two-tone and yellow gold Submariner watches, possibly the most significant aesthetic update is found on the white gold version of the updated 41mm generation.

While the first white gold Submariner, the ref. 116619LB “Smurf” was fitted with a glossy blue dial to match its bright blue Cerachrom bezel insert, the updated 41mm white gold ref. 126619LB is fitted with a standard black dial despite still having a blue ceramic bezel. Due to the fact that it does not have a blue dial like its white gold predecessor, the new white gold blue Submariner is likely to pick up a different nickname than the “Smurf” and options such as “BMW” and “Cookie Monster” are just a few of the potential monikers that have been circulating collecting circles. 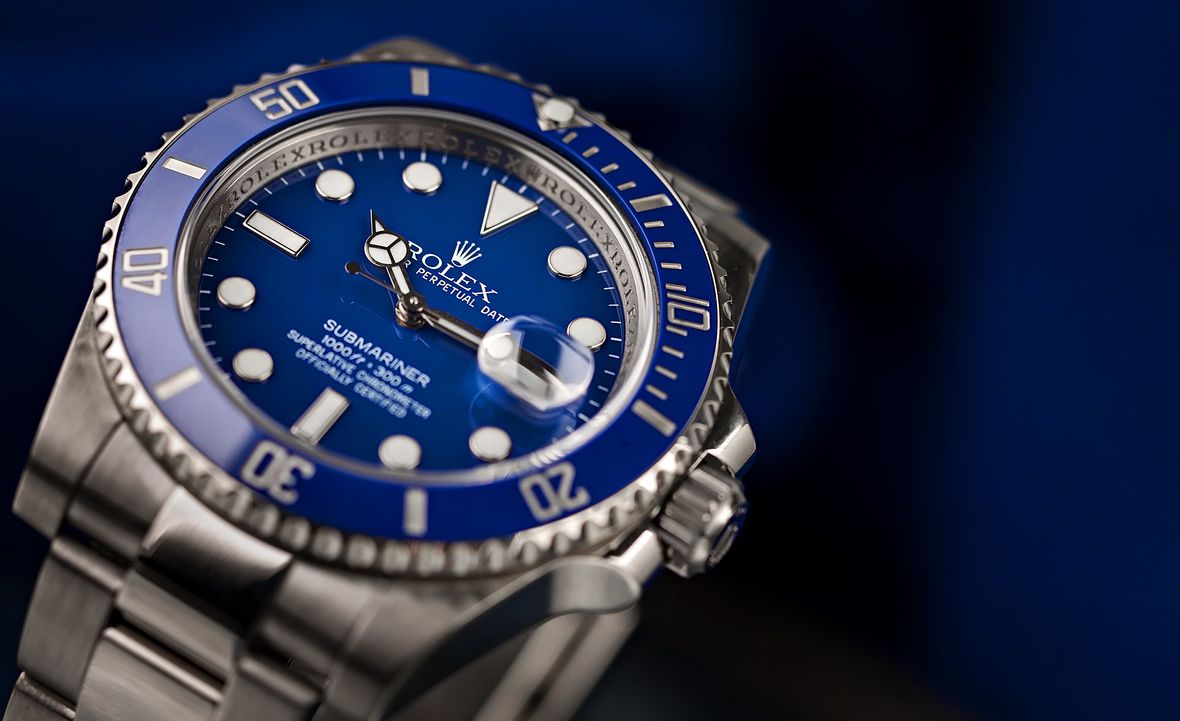 The Blue Submariner: A Premium Option

While it is true that all of the very first Rolex Submariner watches were made from stainless steel and fitted with black dials and matching black bezels, blue Submariner watches have been part of Rolex’s catalog since the late 1960s. Even the very first generation of the Submariner Date was offered with the option of a blue dial and bezel; however, despite being available for the last half-century, the color blue has always represented a premium option within the Rolex Submariner collection.

Not once has a blue dial or bezel ever been fitted to a standard stainless steel Submariner watch, and for the first decade and a half that the color blue was available within the Submariner collection, it was exclusively offered on the solid 18k yellow gold editions of Rolex’s iconic dive watch. To this day, blue dials and bezels can only be found on two-tone and solid gold Submariner watches and the color immediately distinguishes the watches that feature it as premium renditions of Rolex’s iconic professional dive watch.

Blue Rolex Submariner references are standout, playful versions of a genre-defining timepiece. Possibly the most iconic watch ever made, the Submariner feels like it’s always been with us, and the addition of a bold yet versatile color profile gives it a welcome, contemporary freshness that has been a favorite among collectors and enthusiasts for the last fifty years. 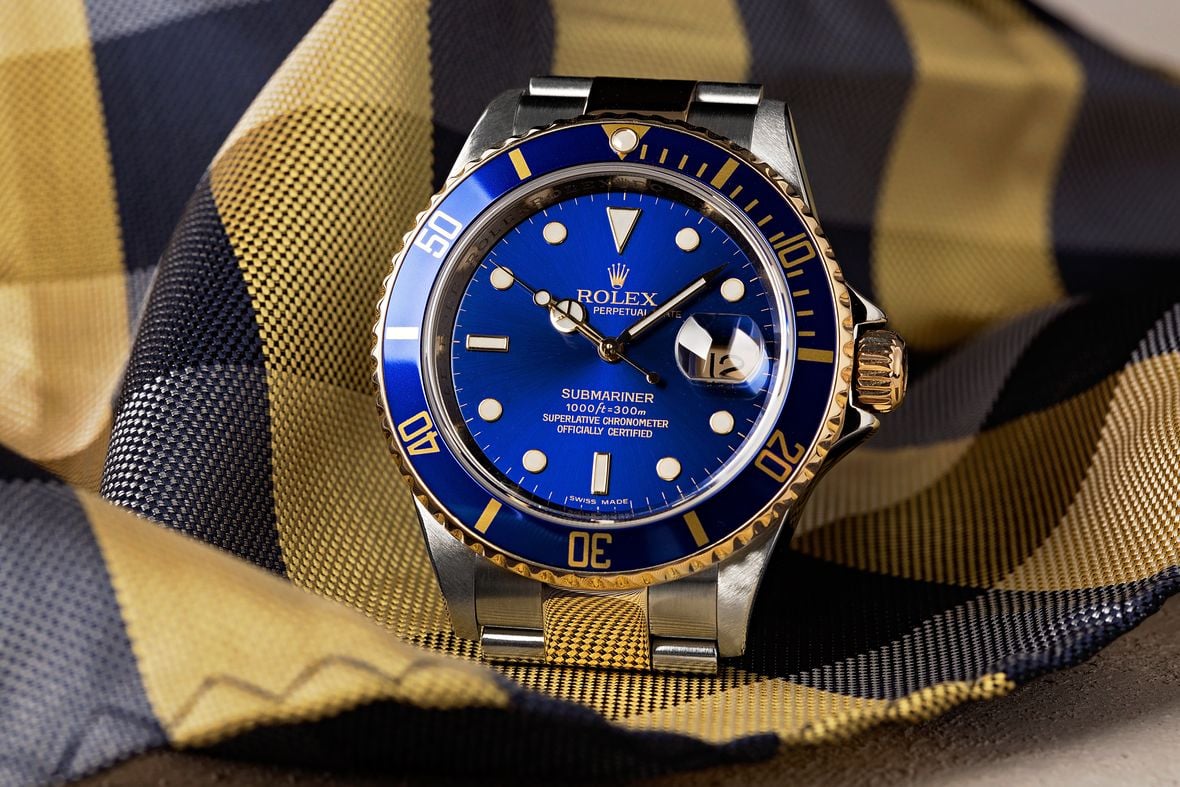 How Do Watches Work – All The Parts

Why Do Watches Hold Their Value

We will be happy to hear your thoughts

Recent Posts
Top Selling
About Us

Thefirstwatches.com is a modern all in one price comparison and review Website that provides you best watches available to buy online. All images are copyrighted to their respective owners. All content cited is derived from their respective sources.

Thefirstwatches.com is a participant in the Amazon Services LLC Associates Program, an affiliate advertising program designed to provide a means for sites to earn advertising fees by advertising and linking to amazon.com